Since our little man was born, we have realized how crazy the holiday season really gets for most people. There’s a bizarre primal instinct that wells up in parents and makes them want to purchase everything they see for their children. My little guy’s birthday is at the beginning of January, so presents can get a little out-of-hand this time of the year. Between his two grandparents and numerous aunts & uncles on my side, plus three grandparents and even more aunts & uncles on my husband’s side of the family…most of the time I don’t know what to do with all the gifts little man gets during the holiday season!

However, last year I heard about this new Christmas gift philosophy, and I have adopted it as my own. It’s called the “Want, Need, Wear, Read” philosophy. It’s pretty self-explanatory. Basically, each person in your household receives 4 gifts for Christmas {which we also do for birthdays}: 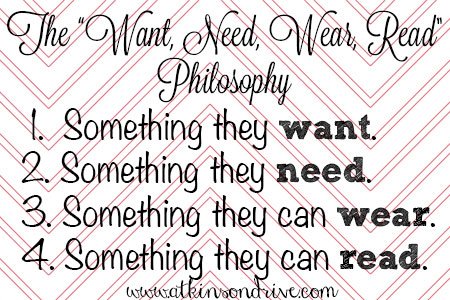 I have found that since adopting this philosophy, we have been less stressed during the holiday season. We don’t have to worry about over-spending or going crazy on Black Friday. It has also helped little man realize that the spirit of this season isn’t all about receiving gifts. In addition, we are able to give more to others, which our son is involved with. This year we chose a 1-3 year old little boy to purchase a toy & necessity for, and little man is old enough to understand what we’re doing which really gets me excited!

Oh…and for those of you who think we might be depriving our child of a wonderful holiday experience…don’t worry…he still gets PLENTY of presents from the family mentioned above! This is simply something we, as a family of three, have chosen to integrate into our list of holiday traditions. 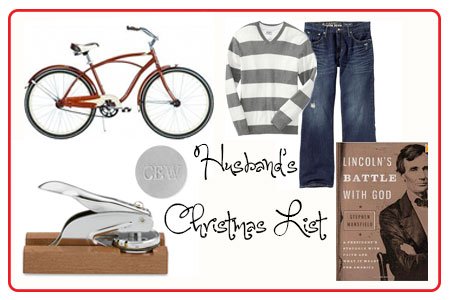 Linked To & Featured At: