Back in December, I shared a mood board with you that I’m hoping you remember (if not, here’s a refresher). My husband got a new office at work, and from the time they started building, I was planning! Lucky for me, my man isn’t picky about decor and realizes that I am the interior decorating mastermind in this family. ;-) Well…he’s finally moved into the office, and while we’re still putting the finishing touches on the space, I just couldn’t wait to show it to you any longer! 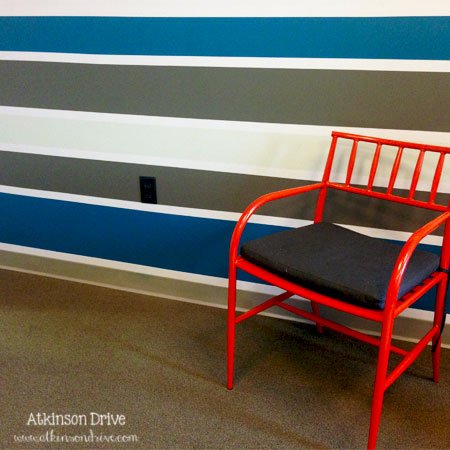 The husband’s office is larger than the other tech offices, but it’s an odd shape, so figuring out furniture placement wasn’t the easiest. I wanted to make sure that he had plenty of space to work without feeling cramped, and that he could hold meetings in his office when necessary. 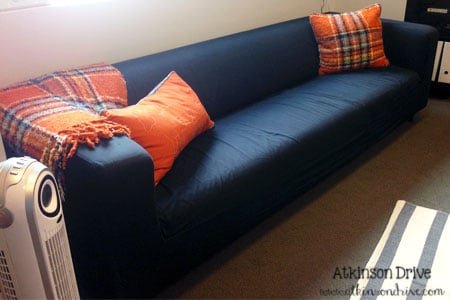 This couch was the first piece of furniture we purchased as a couple. It was the couch we had in our home the whole time we lived in California. You might not be able to tell from the photos, but it’s huge…9 feet to be exact! It also just might be the most comfortable couch you’ll ever sit on – thank you IKEA for making comfy furniture. We were extremely lucky that it fits perfectly under that window. Obviously, it was meant to be in here! 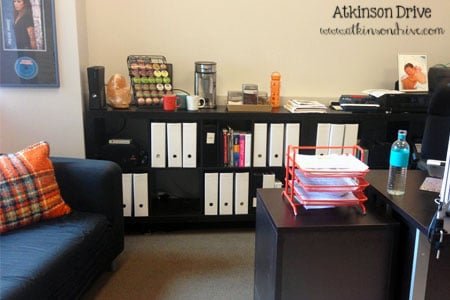 You may also recognize the two Expedit shelving units from IKEA flanking the back office wall. The husband had one of those in his former office, and we bought a second one to fill in that wall space. This office has a ton of nooks and crannies, in case you couldn’t tell, so having large furniture pieces to fill them really helped us maximize the storage space in here. The two Expedit shelves fit in that nook with approximately an inch to spare, and I love that they {mostly} cover up the electronics and wires running along the wall. 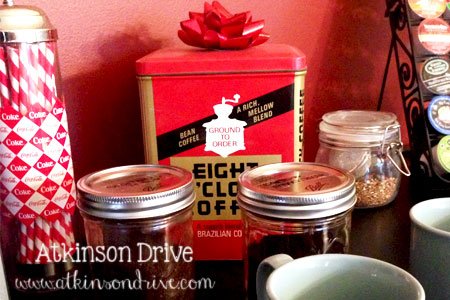 Because of the long – and often crazy – hours that our church tech guys put in, I wanted to make sure that the hubs had a quick and easy way to grab a pick-me-up cup of coffee when working early or late. We do have a coffee shop in the church lobby, but they aren’t open long hours, so often the tech guys end up having to leave church property to grab a drink. So, I set up a coffee bar for the husband and his co-workers. I am loving this little Hamilton Beach single-serve coffee maker

. Just fill up a mug with clean water, add in some ground coffee, and brew! Quick and easy. 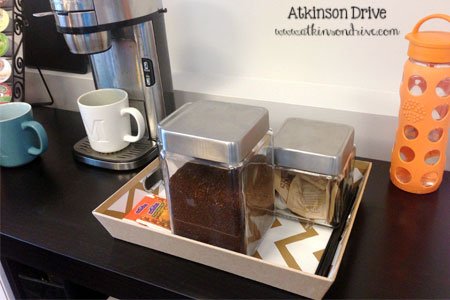 The reason I picked this specific coffee maker is because it’s very compact {since there’s no large water tank}, and it doesn’t take any sort of coffee pods. I set up a letter tray with everything anyone would need to make coffee…ground coffee {obviously}, sugar, splenda, creamer pods, and stir sticks. And while the husband often uses a travel mug to drink from, I got him a few decorative cups for when he has company over. 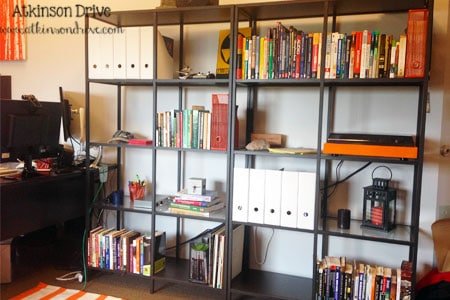 Because this is an at-work office {not a home office space}, I needed to make sure there was an abundance of storage. So, we bought two IKEA Vittsjo shelving units. I love how they lend an industrial look to the space without creating visual clutter. There’s still a search going for some manly accessories to dress-up the shelves, so don’t judge me on the “styling” here. You’ll notice there are a lot of magazine files spread throughout the space…that’s because tech guys have a lot of what I would refer to as … clutter! Between the equipment manuals, wires & cables, magazines, notebooks, etc. the husband’s office can get messy very quickly. I love the magazine files because they give the illusion of order, even if they’re just stuffed with random items. 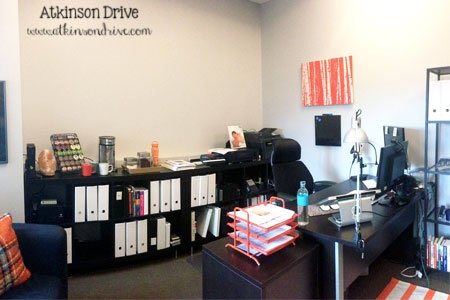 As you’ve been looking through these photos you’ve probably been asking yourself what the blank wall above the Expedit shelves is all about. It seems really out of place in an office that is mostly finished doesn’t it? But…surprise! It’s what I like to refer to as the “digital white board!” My husband is a leftie, and while we were planning this space he made his desire for an office whiteboard known. 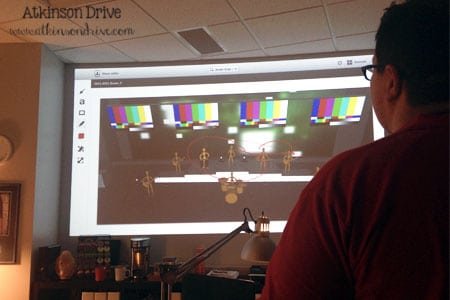 But, I know him all-too-well, and reminded him that after a week or so he would starting hating it and never use it. He always smears the words, so it doesn’t really work for him anyway. That’s when I came up with the digital white board idea. All we did was hang a projector to display on that wall {the gray is light enough that we didn’t need any special paint for the images to show up}. This way he can review the weekend service, dictate articles and e-mails, or use it in conjunction with his Bamboo tablet

to write notes. It is so versatile, and works really well for him. 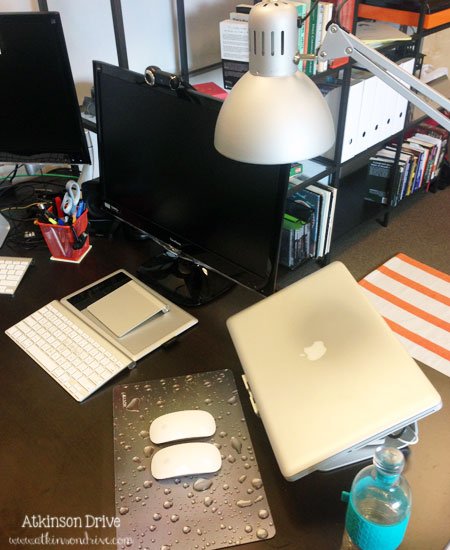 I have a confession to make…I’ve been holding out on y’all. I have saved the best for last! This wall is my favorite of the space, and definitely a huge focal point. As you can see, I painted some stripes on the bottom half of the wall, which you can see from the meeting space outside of the office. They really draw you into the space. Since the husband’s favorite color is orange, there are a lot of pops of that throughout the space. I love how the blue stripes add an unexpected accent to help keep the space from being too monotonous.
*Sidebar: You’ll notice that the blue is carried through the office in the plaid on the couch, and in some other small accessories. 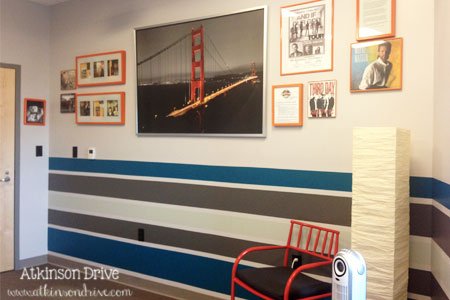 The gallery above the stripes is still a work in progress, but I’m loving it. Fun fact: my husband used to be a road manager for many Christian bands and artists back in the day. Between those tours and all the ones we’ve hosted here at the church, he has a large collection of signed posters and letters from artists. It’s fun to display that memorabilia, so I’ve started framing things as he gets them. Maybe you wouldn’t have guessed, but it’s very difficult to find orange frames anywhere, so I just bought cheap black frames and painted them orange. That way the whole wall stays cohesive and I don’t have to spend a ton of time and money making the frames work together. 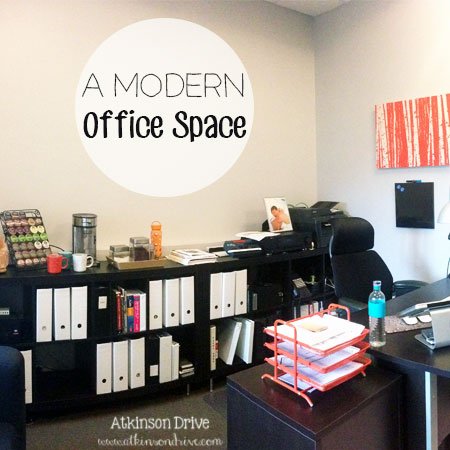 I’m so thrilled the the husband has a nice place to go and get work done when he can’t be at home. I truly believe this is an office space that reflects who my husband is and caters to all of his work needs, while maintaining a comfortable and professional atmosphere.
That about wraps up the space {for now}. I hope you all enjoyed it – this sure was a labor of love, and we love it!