After making a no-sew shark costume for my little guy last Halloween, I knew I wanted to attempt making another fun outfit for him this year. My goals were just to keep it simple and affordable. I love seeing him dressed up, and getting a glimpse of how happy he is when he sees his costume for the first time…but I also appreciate being able to re-use pieces of the costume in everyday life. The less waste possible, the better!

This year, with the release of Despicable Me 2, my buddy has been obsessed with Minions. It’s pretty much the most adorable thing ever when he sings “Ba-ba-ba, ba-ba-nana…po-ta-tooo!” So, I landed on the idea that he would be a Minion for Halloween (and the husband will be Gru). There’s also potential for a baby Minion costume for me…but we’ll see about that later. ;-) 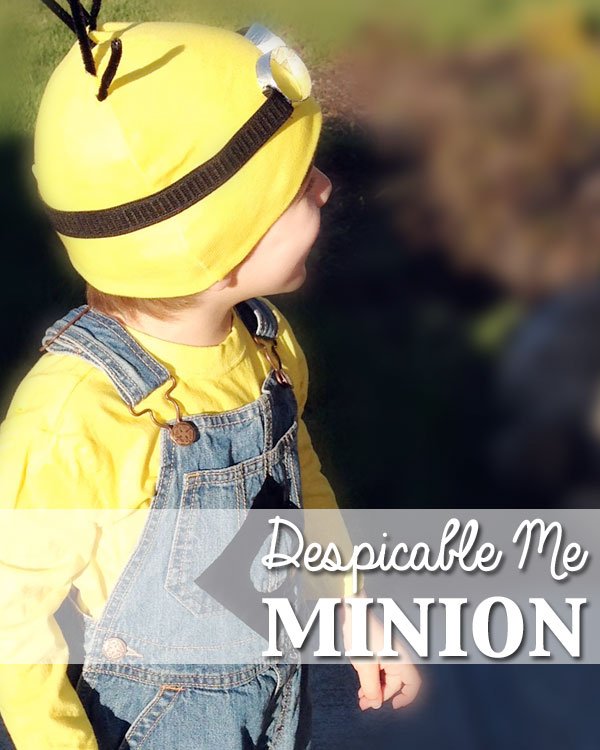 This costume is incredibly simple to make. It’s not quite as cheap as last year’s (which rang in around $10), but most of the elements can be worn in daily life, so I’m ok with it. Also, I bought everything new, but you could definitely make it more affordable by shopping at thrift stores for the clothing pieces.

The first thing I did was wash all of my fabrics: the overalls, t-shirt, hat. Then, following the instructions on the dye bottle, I dyed the t-shirt and hat. To achieve the yellow color I was looking for, I used Rit in Lemon Yellow, and soaked the fabrics for an hour. 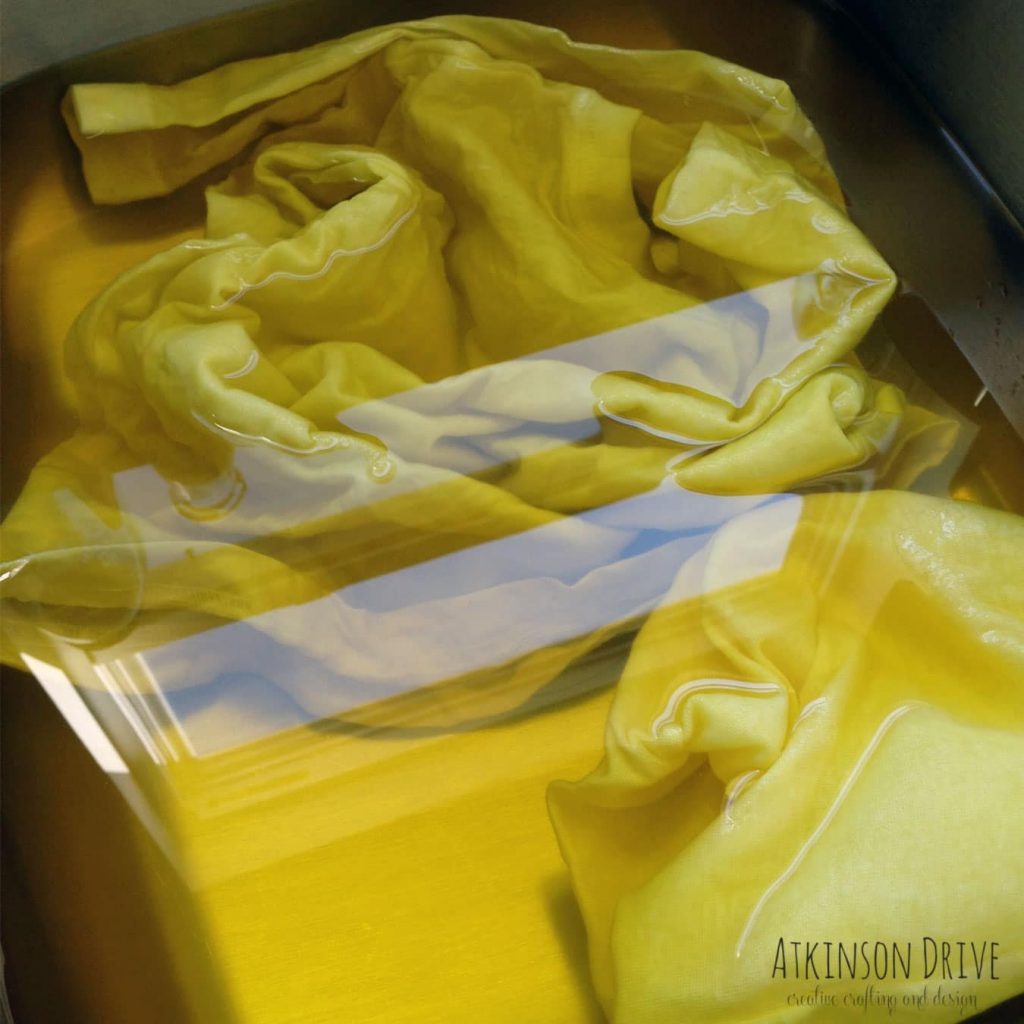 While the shirt and hat were going through the washer and dryer, I worked on the other costume elements. To make the goggles, I cut two slices of a toilet paper roll (approximately 1/2″ thick), wrapped them in aluminum foil, and hot glued them together. 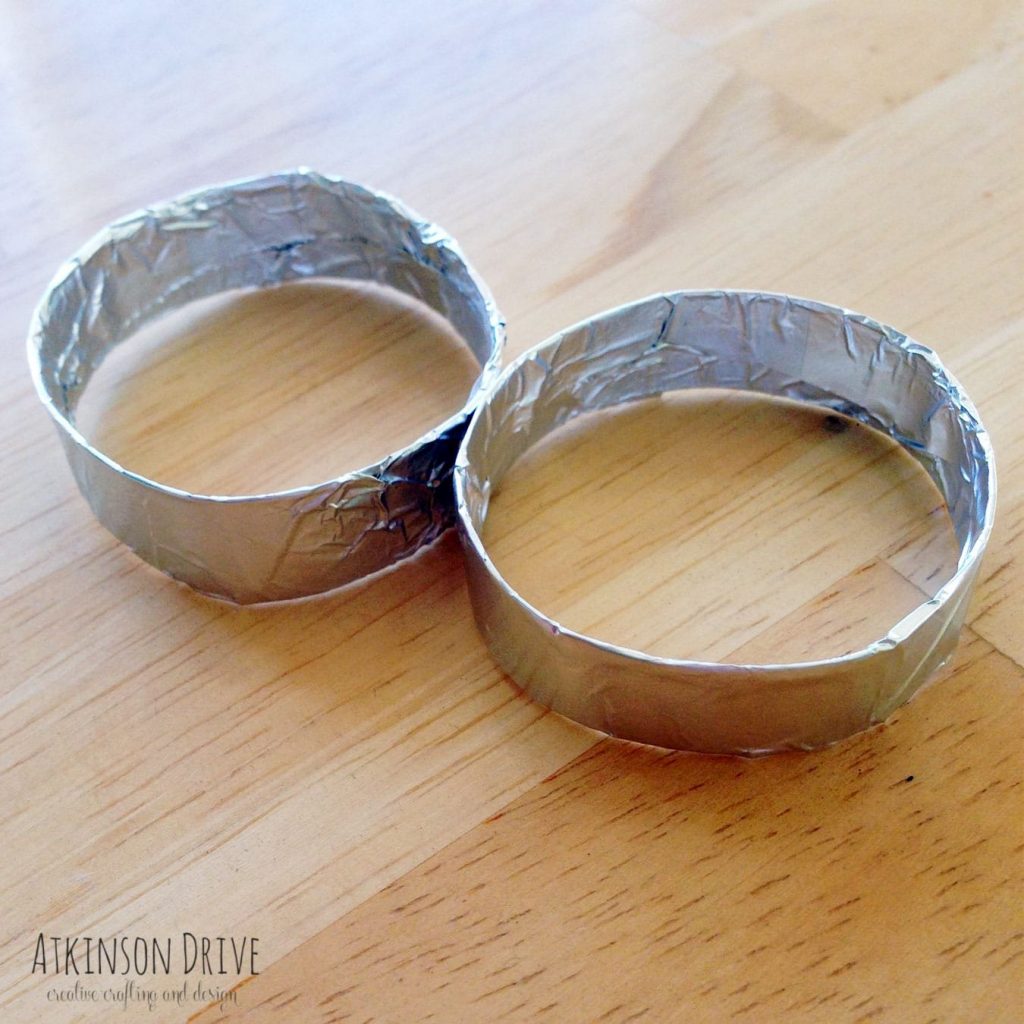 Next, wrap the black elastic around your child’s head to get an idea of what size you’ll need for the goggles. When you’ve figured out the correct measurements, hot glue the ends of the elastic to the toilet paper goggles you made in the last step.
*Hint: don’t use the hat as a sizing guide…it has a lot more stretch than the elastic so you’ll most likely end up with goggles that are too small for your child’s head. 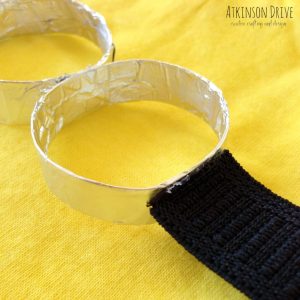 For the Minion hair, you’ll need to cut short pieces of pipe cleaner. I only used one pipe cleaner, and I didn’t use exact measurements because I wanted the hairs to be a bit crazy and all-over-the-place. Using hot glue, attach the “hairs” to the top of the hat. 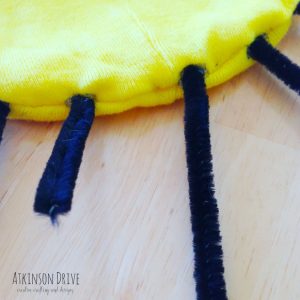 I used a few dabs of hot glue to keep the goggles in place on the hat. But, feel free to leave them loose so your little Minion can actually wear them if they want. 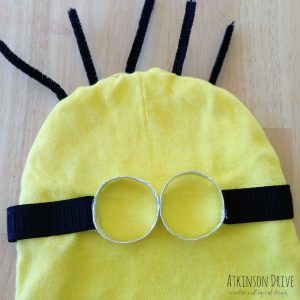 I had a very difficult time finding overalls that were big enough to fit my son. Most of the ones I found maxed out at 24 months (which is way too small for him now!). I ended up having to purchase a pair from Osh Kosh B’Gosh…which is fine, and I did end up getting them on sale, but they still came out to just under $20. So I’ll be darned if he can’t wear them again because I painted a huge “G” logo on them!

My biggest goal, other than being able to re-use the overalls, was to cover up the Osh Kosh logo on the front. So, I drew a Gru logo on some matte black vinyl and cut it out. The vinyl doesn’t completely cover up the label, but it does a pretty good job. And – surprisingly – the vinyl sticks really well to the denim! 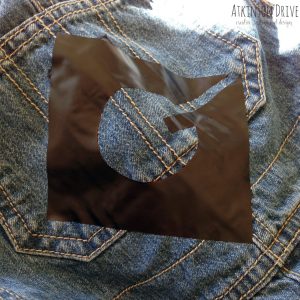 Throw on some black shoes – black gloves if you want – and you have a super simple, and incredibly adorable Minion! 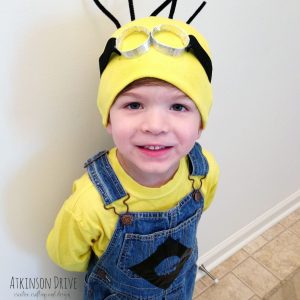 I finished this project while my little guy was at school one day, and when he got home he (literally) shrieked with joy! Isn’t that one of the greatest parts about making something for your child? They have so much enthusiasm about everything at this age! 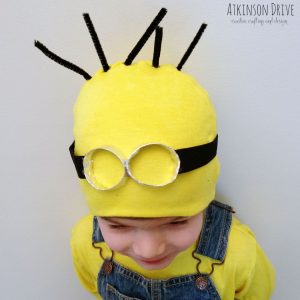 I’m even trying to teach him to sing his favorite Minion song when people answer the door as he trick-or-treats. It will be epic if I can get him to do it, and I’ll for sure post a video on Instagram for all of you! 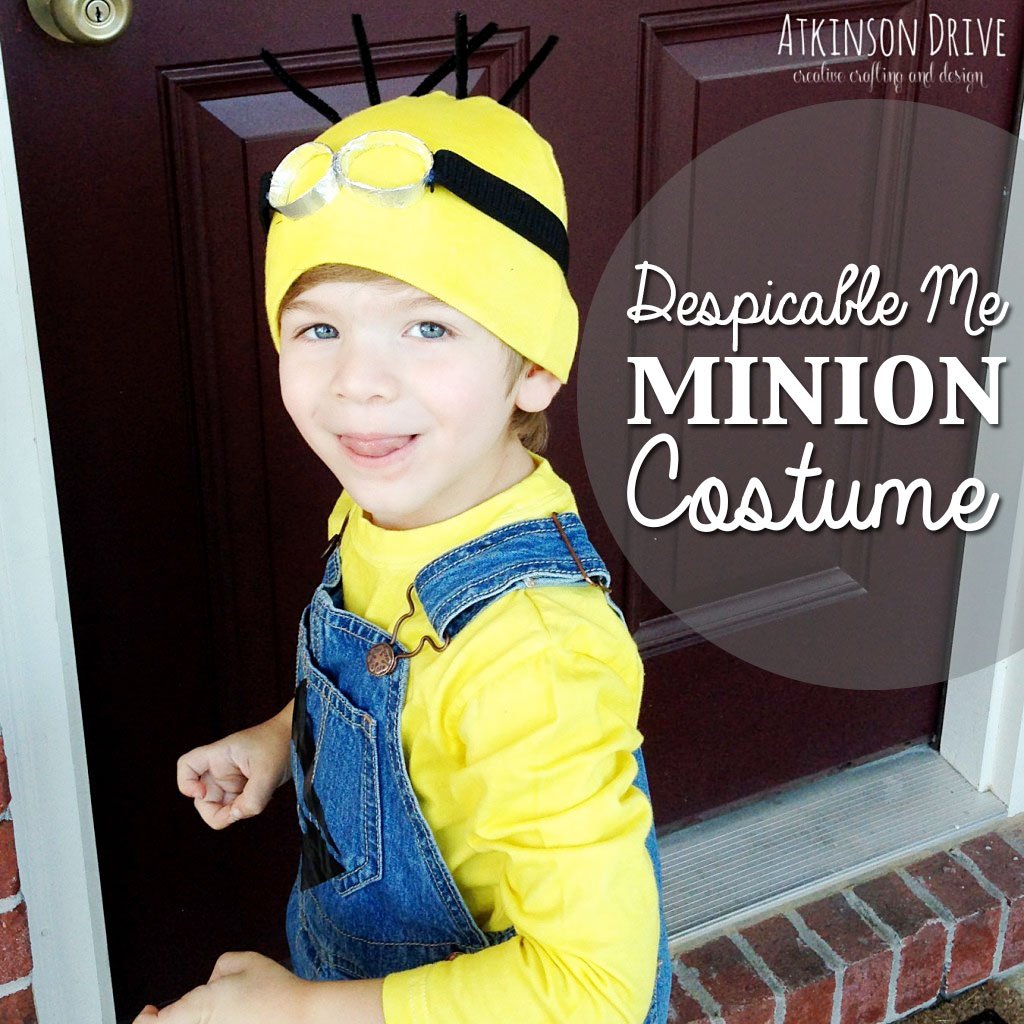 What is your little one going as for Halloween this year?