Here are a few signs I was seeing that indicated little man was ready for the big-boy potty:
– Staying dry during most nap times (and for periods of 2 hours or longer during the day)
– Announcing either that he was getting ready to go, going or had gone potty in his diaper
– Able to sit and engage in activities for several minutes at a time
– Walking and running well (so he can make it to the potty in time)
– Interest in potty activities of others
– No interest in wearing diapers

We got to a point where he almost refused to go in his diaper anymore. He would tell me, and when I went to change his diaper he would still be dry & wanting to go in the potty.

For 6-9 months we have had his little potty seat in the bathroom so he would see it all the time. Occasionally he would want to sit on the potty, usually around bath time when he was already naked. I knew he most-likely wouldn’t actually go during these early potty-sitting excursions, but I think it was a really great start for him, and a way to show the potty in a positive light. 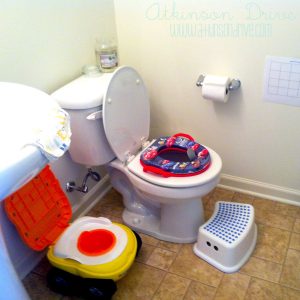 I did some research on potty training methods and sort of combined a few that I liked. My initial thought was to try a one-day potty training method I had seen on Pinterest a while back, but to be completely honest, some of it seemed a little “overboard” to me. My main goal was to get the majority of the potty training down in the first day and really keep little man energized about it. Read on to see how I tweaked a few ideas to find our perfect potty training method! 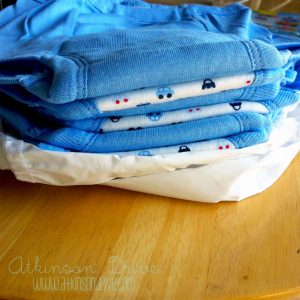 Before little man was awake the morning of our big push-to-the-potty I got everything ready to go so I could focus on him all day.

We already had a set of 6 “cool” undies that little man chose from Children’s Place (they were the ones with dinosaurs, guitars, and motorcycles – all boy). I knew these wouldn’t be the best for leaks, so I went to Meijer and picked up a few sets of the Gerber training pants and some plastic pants for nap time. Six pairs of the training pants were enough for us…and if need be I had the cool undies as a back-up plan.  I already had them all washed and I kept them next to the potty.

The downstairs bathroom was equipped with a potty seat and his little potty so he would have the choice of which he preferred. I also whipped up a potty sticker chart and got some of his favorite Curious George & Sesame Street stickers so every time he went to the bathroom he could have a special sticker reward! I have heard so many different opinions on the potty reward system. Blogs I have read suggest using candy as a reward after they go to the bathroom and soda in order to make them drink and go. 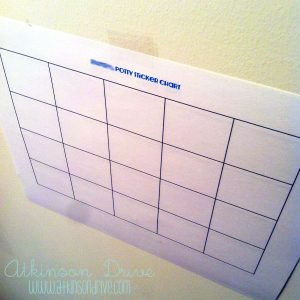 I personally didn’t really agree with either of these methods. The stickers were my way of still encouraging him to go and getting him excited about the big boy potty without creating any negative eating habits or causing him to only go for the reward (and now, a few weeks later he is “over” getting stickers). 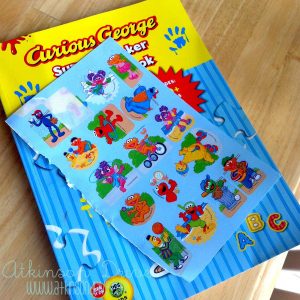 I did make sure that I had all of little man’s favorite foods/snacks (and some treats) for our big potty training day. I split them into “morning” and “afternoon” bags so whenever he was hungry he could just go in his bag and pick whatever he wanted to eat! This was a huge treat, because usually I only give him a choice of two things for snacks. 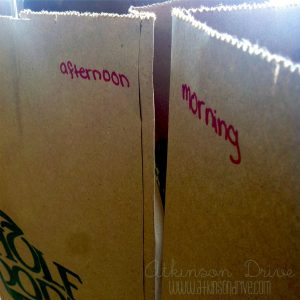 Everything was mostly “healthy” – well, at least it wasn’t all junk food. I had a few dum dums for him and other snacks he likes: Plum Organics food pouches, Curious George fruit snacks, cheesy soy crisps, and more. 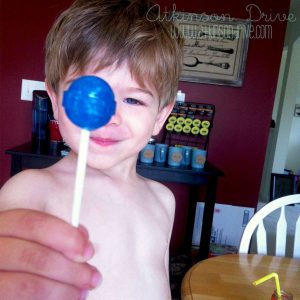 There was also a “toy” bag I had assembled. A few of the things I did get especially for potty training like his Dino Poop (boy does it really stink!) and the Potty Train book. Everything else was stuff he already had, but had been put away for a while. It was so fun for me to spend a whole day really focusing on and playing with him! 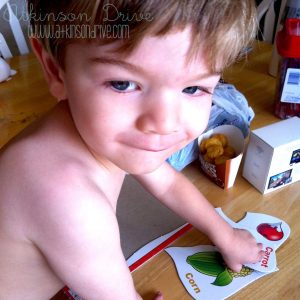 There is a necessity in getting your child to drink while potty training – if they don’t have to go there’s no training to be done. I found these “cuties” at the store and I just had to snatch them up. You can’t really feel too bad about letting your kid drink real fruit juice smoothies. About half way through the day he got bored with drinking these and asked for water or milk the rest of the day {cannot complain}. 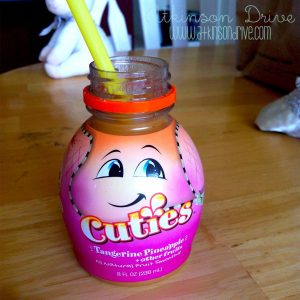 From the moment he woke up in the morning, both daddy and I made a huge deal about potty training day. We took his diaper off and let him pick his big boy undies! Immediately we went down to the bathroom and let him go potty on the big boy seat. For the first hour or so, there was a 15 minute timer set so he didn’t have an accident; he did get frustrated after a while about going so often, so I stopped setting the timer. I was amazed at how well he did throughout the day with letting me know when he had to go to the bathroom. I guess it just goes to show you that when they’re ready, the process will be pretty painless.

It’s been about a month since our potty training day. We still wear diapers at night and when we go to the store. Last week we had our first outing with undies and he did really well!

Do you guys have any tried-and-true potty training tips?