I’m sure other moms with boys can relate to my current situation…little man is obsessed with dinosaurs right now! I try to steer clear of buying toys that I think will be just a phase for him, but I’ve had a hard time with the dinosaur thing. There’s just so much cute stuff out there, and we love to watch the show Dinosaur Train which has a great line of toys. Anyway, I thought it would be fun to give him an exciting surprise paired with some sensory play. So I made some frozen dino eggs. This was one of the most simple projects I’ve ever done and he had a BLAST! 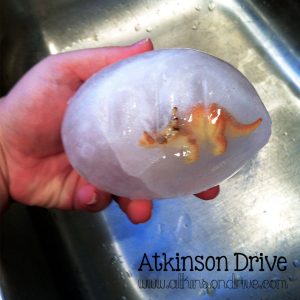 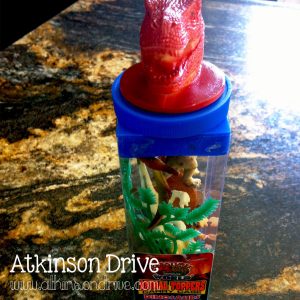 I found this tube of dinosaurs in the toy section at Meijer. At first, I could only find the large dinosaur models that were at least $5 each and almost gave up on the project all together. Fortunately, I decided to really scour the aisle and found this which included 6 dinosaurs, a tree, and a rock – all for $3! *Score* It was hidden pretty well…in a bin in the very bottom row mixed in with a ton of other stuff. If all else fails and you can’t find any affordable dino toys at your local store, you can order them {here}. 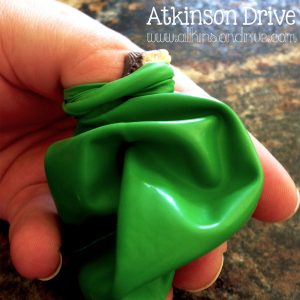 The most difficult part of this whole process {once you find the dinosaurs} is getting them in the balloons without poking a hole. I found the easiest way to achieve this is by stretching the balloon as large as possible using two hands and then trying to engulf the dinosaur with the balloon. Most of the time I could get the dinosaur in with only a little struggle. I’m sure there are other ways to do this also, and if you have any great tips please leave a comment! 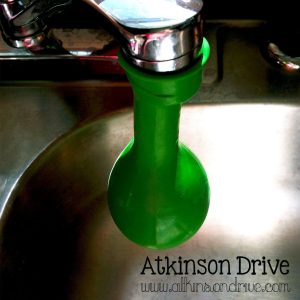 Once your dino is in the balloon, fill it up with water. Make sure to over-fill the balloon a tiny bit from your preferred size because {trust me} you WILL lose some water in the balloon removal and tying. Otherwise you will end up with some mini dino eggs like this one {on the left}: 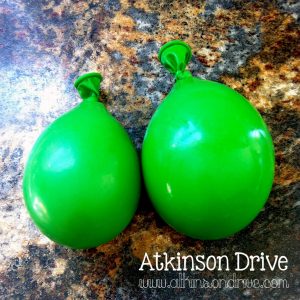 Leave the balloons in your freezer until they are completely frozen {mine took about 1.5 hours}. I made these while little man was napping so the surprise wouldn’t be ruined, and it was the perfect timing. When he woke up from his nap we got to play!

Just before you’re ready to ‘birth’ the dinos, take them out of the freezer and cut off the balloons. This will leave you with frozen DINO EGGS! 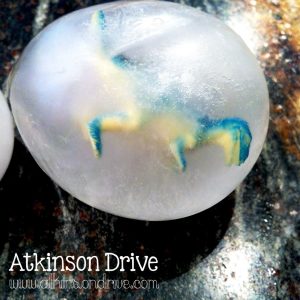 I mean, seriously…aren’t they super cool?!?! Even I had a fun time playing with them.

It was really cool to see little man inspecting them when I first brought them over. Some of the dinos were close to the edge and some were farther in the eggs; he could see the dinosaurs but couldn’t get to them and was a little perplexed. Not to mention, he was not too keen at first on how cold the eggs were. 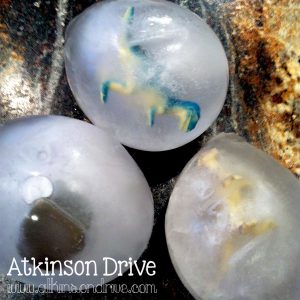 The first one I had to start melting the egg for him to get him warmed up to the idea {no pun intended}. Once he saw that holding the frozen dino eggs under the warm water would get the dinosaurs out he was all over it! I also provided a fork and some other utensils that could be used to break up the ice, but he preferred the water for faster results. 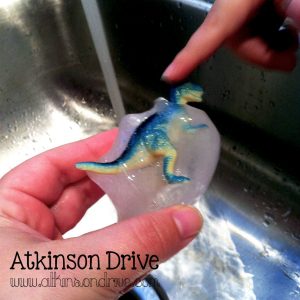 This is such a great sensory play idea. The ice is cold and smooth, the water is warm and ‘tickles’ your fingers, the dinosaurs are colorful and rough, etc. It’s also a good introduction into science and teaching about ice, water, melting, etc. 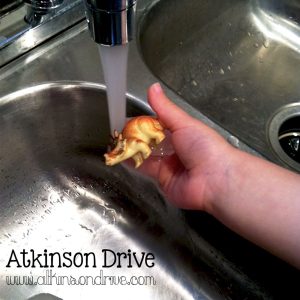 After all of the dinosaurs were born out of their eggs, we had to give them a bubble bath! 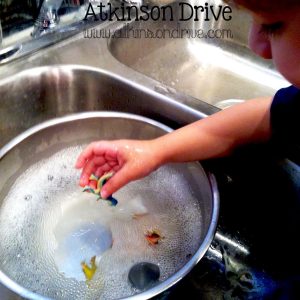 I took a bowl, filled it with water and soap then gave little man some sponges, brushes and cups to help scrub and rinse the dinosaurs. When little man was done, we dumped out the water and dried the dinosaurs off with a hand towel.

All-in-all I’d say a good 30 minutes of time was taken up melting the frozen dino eggs and washing & drying the dinosaurs. What I love so much about this activity is that there are a ton of different variations you could use to make it a different experience every time