As you might remember, on Tuesday I showed you the first of several posts outlining my little man’s Lorax themed 3rd birthday party. Today I wanted to share with you the activities we had at the party. There were only a few children at the party, and several were babies much too little to actually participate, so I didn’t go too crazy with the games and crafts. I’m sure at the next birthday party we will have more activities available to the kids. 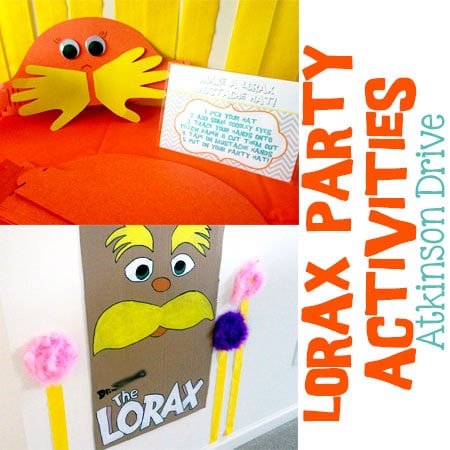 We had one game to play that was Lorax themed. I took one of the big Christmas boxes we had gotten {from little man’s car} and cut it into a rectangle. Then, I propped the cardboard up onto a wall and used a projector to trace out a large Lorax face…the one from the movie poster to be exact. I also traced out “The Lorax” movie title. Originally, I was going to paint the whole piece of cardboard orange, of course. However, the cardboard was just sucking up my paint, and that would have taken up more time than I had. So, I opted to leave the majority of the game unpainted and I just filled in the Lorax’s features. 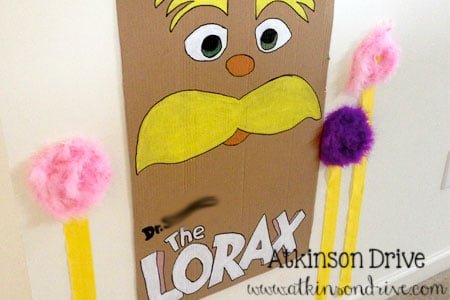 I also made a few truffula trees to flank the game space. It was super simple…I just used a few boas {like the ones here

} taped to the wall, and hung yellow streamers from the boas to the ground. Easy peasy but oh-so-cute!

Using my Silhouette Cameo, I cut out several large mustaches in different styles. I opted to not go for the blindfold figuring the younger children wouldn’t like it. So, we just put our hands in front of their faces when they were “pinning” the mustaches on. The winner of the game got a Lorax activity book! 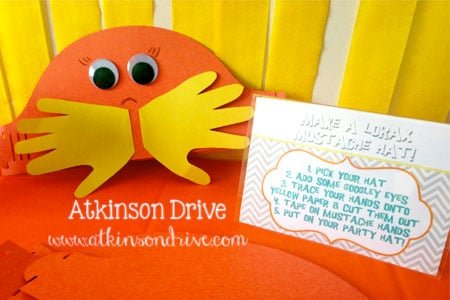 For our Lorax craft, we made Mustache hats! Again, I used my Silhouette to cut out the hat shape out of orange construction paper. The kids then got a chance to trace their hand-prints onto yellow paper and cut them out {or have mommy help}. The hand-prints were then attached to the hat with glue to make a Lorax Mustache. They then got a chance to glue on a pair of googley eyes and draw on a nose. My little man wore his hat around the house for days!

All-in-all, I’d say we had a great time…and the activities were the perfect way to get little ones involved in the party!